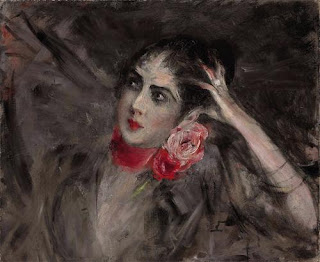 When I was little I heard the tale of The Velvet Ribbon in a children's horror book called "In a Dark, Dark Room and Other Scary Stories" The tale was simple and short, but for some reason the tale was just so darn memorable. The story itself is eerie and depending on the version you hear/read it might give you a nightmare or two. I find it interesting that in each version of the story, the husbands interest in the velvet ribbon becomes an obsession. We never find out why the wife is headless and much to the husbands dismay his wife's past is ambiguous in nature. The ribbon could symbolize the woman's past and the man's inability or ability to come to terms with the fact that no matter her past will remain a mystery till she deems him worthy enough to reveal it to him.

She was beautiful in a strange, mysterious way. Her hair and her deep bottomless eyes were as black as the velvet ribbon around her neck. He planned to marry her before the next full moon rose in the autumn sky.

On their wedding, he watched her walked towards him up the long aisle. She was dressed in a white gown, a white veil, and carried a bouquet of white flowers. Even her face was ivory white. But below it, around the ivory neck, was the black velvet ribbon. He remembered staring at that ribbon as the strains of the wedding march brought his bride nearer to him. He remembered the curious and shocked looks on the faces of the wedding guests. But then his eyes met hers, and he was drowning in their bottomless darkness.

He didn't think of the velvet ribbon during the rest of his wedding day. It was a joyous time, and if people thought his wife was a bit strange, they kept that to themselves. That night, when they were alone, he saw that the ribbon was still there, still circling her lovely neck. 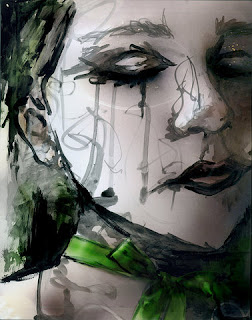 "Don't you ever take that ribbon from around your neck?" he asked, hoping his question was a needless one.

Her answer disturbed him, but he did not question her further. There was plenty of time for her to change her ways.

Their life together fell into a pleasant pattern. They were happy, as most newly married couples are. He found her to be a perfect wife... well, nearly perfect. Although she had a great number of dresses and wore a different one every day, she never changed the black velvet ribbon. This ribbon began to be the test of their marriage. When he looked at her, his eyes would inevitably fall to her neck. When he kissed her, he could feel the ribbon tightening around his own throat.

"Won't you please take that ribbon from around your neck?" he asked her time and time again.

"You'll be sorry if I do, so I won't." This was always her answer. At first it teased him. Then it began to grate on his nerves. Now it was beginning to infuriate him.

One day he tried to pull the ribbon off after she had repeated her answer, like a mechanical doll. It wouldn't come loose from her neck. He realized then, for the first time, that the ribbon had no beginning and no end. It circled her neck like a band of steel. He had drawn back from her in disgust that day. Things weren't the same with them after that.

At the breakfast table, the black ribbon seemed to mock him as he drank his suddenly bitter coffee. In the afternoon, outisde, the ribbon made a funeral out of the sunlight. But it was at night when it bothered him the most. He knew he could live with it no longer.

"Either take that ribbon off, or I will," he said one night to his wife of only four weeks.

But he did not sleep. He lay there, staring at the hated ribbon. He had meant what he said. If she would not take off the ribbon, he would.

As she lay sleeping and unsuspecting, he crept out of bed and over to her sewing box. He had seen a small, sharp scissors she kept there. It was thin enough, he knew, to slip between the velvet ribbon and her soft neck. Gripping the scissors in his trembling hands, he walked softly back to the bed. He came up to where she lay and stood over her. Her head was thrown back on the pillow, and her throat with the black velvet ribbon around it rose ever so slightly with her breathing.

He bent down, and with one swift movement, he forced the thin blade of the scissors under the ribbon. Then with a quick, triumphant snip, he severed the ribbon that had come between them.

The black velvet ribbon fell away from his wife's neck....her head rolled off the bed and landed on the floor with a thump. She was muttering, "You'll be sorry, you'll be sorry......." 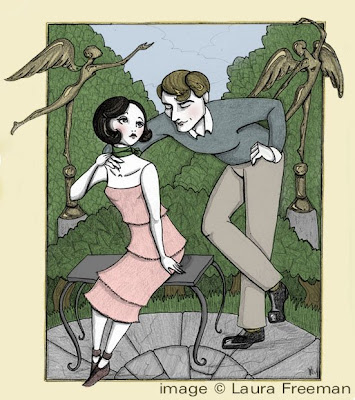 The Green Ribbon by Laura Freeman

Once there was a man who fell in love with a beautiful girl. And before
the next full moon rose in the sky, they were wed.
To please her husband, the young wife wore a different gown each night.
Sometimes she was dressed in yellow; other nights she wore red or blue
or white. And she always wore a black velvet ribbon around her slender
neck.
Day and night she wore that ribbon, and it was not long before her
husband's curiosity got the better of him.
"Why do you always wear that ribbon?" he asked.
She smiled a strange smile and said not a word.
At last her husband got angry. And one night he shouted at his bride.
"Take that ribbon off! I'm tired of looking at it."
You will be sorry if I do," she replied, "so I won't." Every morning at
breakfast, the husband ordered his wife to remove the black velvet
ribbon from around her neck. Every night at dinner he told her the same
thing.
But every morning at breakfast and every night at dinner, all his wife.
would say was, "You'll be sorry if I do. So I won't."
A week had passed. The husband no longer looked into his wife's eyes. He
could only stare at that black velvet ribbon around her neck.
One night as his wife lay sleeping, he tiptoed to her sewing basket. He
took out a pair of scissors.
Quickly and quietly, careful not to awaken her, he bent over his wife's
bed
and
SNIP! went the scissors, and the velvet ribbon fell to the floor
and
SNAP! off came her head. It rolled over the floor in the moonlight,
wailing tearfully:
"I...told...you...you'd...be...s-o-r-r-y!" 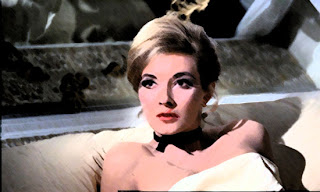 Jane wore a yellow ribbon around her neck everyday. And I mean everyday, rain or shine, whether it matched her outfit or not. It annoyed her best friend Johnny after awhile. He was her next door neighbor and had known Jane since she was three. When he was young, he had barely noticed the yellow ribbon, but now they were in high school together, it bothered him.

“Why do you wear that yellow ribbon around your neck, Jane?” he’d ask her every day. But she wouldn’t tell him.

It finally occurred to Johnny that he and Jane were going steady, and he still didn’t know why she wore the yellow ribbon around her neck. So he asked her about it yet again, and yet again she did not tell him. “Maybe someday I’ll tell you about it,” she’d reply. Someday! That answer annoyed Johnny, but he shrugged it off, because Jane was so cute and fun to be with.

Well, time flew past, as it has a habit of doing, and one day Johnny proposed to Jane and was accepted. They planned a big wedding, and Jane hinted that she might tell him about the yellow ribbon around her neck on their wedding day. But somehow, what with the preparations and his beautiful bride, and the lovely reception, Johnny never got around to asking Jane about it. And when he did remember, she got a bit teary-eyed, and said: “We are so happy together, what difference does it make?” And Johnny decided she was right.

Johnny and Jane raised a family of four, with the usual ups and downs, laughter and tears. When their golden anniversary rolled around, Johnny once again asked Jane about the yellow ribbon around her neck. It was the first time he’d brought it up since the week after their wedding. Whenever their children asked him about it, he’d always hushed them, and somehow none of the kids had dared ask their mother. Jane gave Johnny as sad look and said: “Johnny, you’ve waited this long. You can wait awhile longer.”

And Johnny agreed. It was not until Jane was on her death bed a year later that Johnny, seeing his last chance slip away, asked Jane one final time about the yellow ribbon she wore around her neck. She shook her head a bit at his persistence, and then said with a sad smile: “Okay Johnny, you can go ahead and untie it.”

With shaking hands, Johnny fumbled for the knot and untied the yellow ribbon around his wife’s neck.

And Jane’s head fell off.


Origins of the Tale 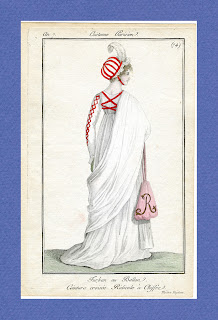 The origin of the tale is unknown, but many believe that the tale roots back to the French Revolution. The events and occurrences of the French Revolution are in fact nightmarish in their own right. After the "Reign of Terror" it became fashionable for the youth who had lost a personal family member to revolution to throw macabre soirees known as 'Les bals des victimes', or 'The victims’ balls'. It was at these parties where a series of strange and rebellious fashions began to make a scene. Women and men both cut their hair in the style of  cheveux à la titus, a style used to commemorate the same cut that was given to the victims of the guillotine. This short hairstyle for men became terribly fashionable throughout Europe and really started the trend for men to have short hair.(The French Reveloution is responsible for quite a few of our modern day fashions, like pants.) The women had their own special fashion, red ribbons were worn across the upper back of dresses and most importantly women began to wear red ribbons around their neck to symbolize where the blade of the guillotine had cut the victims of the "Reign of Tower".

Perhaps, it was during this time period that the tale of "The Velvet Ribbon" was formed, but untill I can find solid information I can't really say for sure. All, that I know for a fact is that the tale will live on and many more versions will be seen in the future.